Why Vaporization Is Better Than Other Odor Control Methods

The Safer Alternative to Ozone, Hydroxyl, and Fragrances

There are many techniques and technologies for removing commercial odors – each with its pros and cons. The range of methods span from:

When it comes to the best of all factors, nothing compares to vaporization of plant-based products for safe, fast, effective, and efficient odor elimination.

How Vaporization Works to Remove Odors

Vaporization equipment, like the WAXIE Dry Vapor Smoke & Odor Eliminator, converts liquid odor elimination products into microscopic particles. The most effective products include WAXIE’s 640 Smoke Away, a natural odor remover made with plant oils, which attract and surround odor molecules, neutralizing their smells.

Vaporization boosts the effectiveness of plant-based odor removers thanks to two key factors: 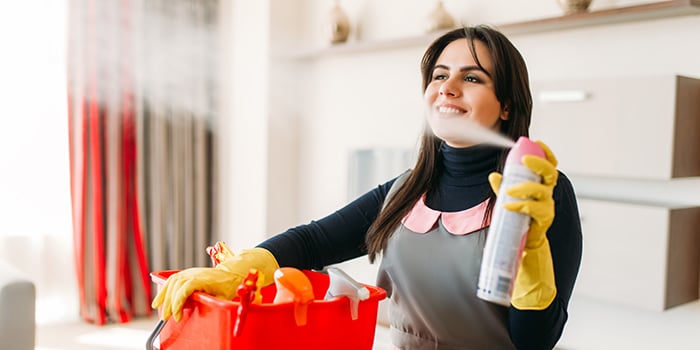 Many businesses use air fresheners or fragrances to cover odors with another scent. While readily available and often more inexpensive, air fresheners do not remove odors completely – they just substitute one aroma for another. Often, the combined scent of masking fragrance and hint of bad smell is worse than the original malodor.

Most customers prefer no scent at all to a fragrance and consider “fresh air” most indicative of a clean environment. Dry vaporized Smoke Away completely neutralizes odors in the air, on surfaces, and set-in fabric smells. The result is zero odors.

When asked the worst smell they could experience in a hotel, 60% of travelers answered the lingering scent of cigarette smoke. In some cases, “soft goods” like bedding, mattresses, curtains, furniture, and carpet have to be thrown away to get rid of set-in smoke odors. When vaporized, Smoke Away is able to penetrate deep into fabrics and walls to make a room odorless and ready for the next guest (sometimes in less than an hour).

Aside from smoke, plant-based odor removers are powerful and diverse enough to tackle almost any smell. From skunk spray to cooking and food odors, garbage to restroom smells, vaporization is effective at eliminating it all.

Speed and Safety vs. Other Control Technologies

When compared to other methods, vaporized plant-based odor removers provide a safer solution. Thanks to their natural ingredients, they can be used anywhere, anytime—near staff, children, pets, and individuals with compromised immune systems.

Products with synthetic fragrances have been found to include ingredients that can cause harmful side effects. Specifically, air freshener sprays contain dangerous chemicals linked to neurotoxicity (a poison which acts on the nervous system), skin allergies and irritation, and diseases like cancer and asthma.

Until recently, ozone generators have been the only odor-removing solution available to facilities professionals. The Environmental Protection Agency (EPA) has dedicated much time and effort detailing the harmful effects of ozone generators and the health risks associated with exposure for any duration.

According to EPA studies, ozone is a “potent lung irritant,” which can cause a variety of respiratory ailments, even in low amounts. This is why all federal agencies, including the EPA, require ozone to only be used in unoccupied spaces.

Hydroxyl generators use UV lights to convert airborne water into odor-neutralizing “radicals.” They are a safer alternative to ozone generators but can take up to three times longer to treat an area. Depending on the brand and how they work, some hydroxyl machines can produce harmful ozone.