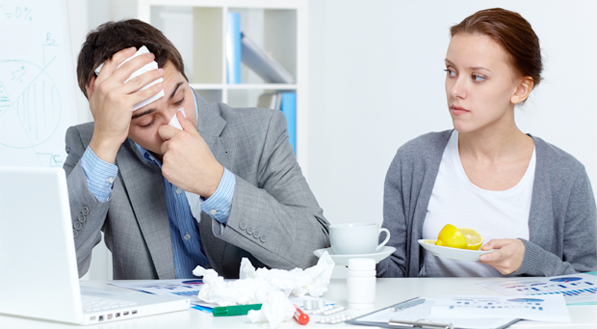 Consider these findings from Kimberly-Clark Professional studies that measured contamination levels at work, away from home and at school:
• At work: The break room topped the list of office germ hot spots and the average desk -- where many people eat their lunch -- was found to have 20,951 germs per square inch. Sink and microwave door handles were the dirtiest surfaces touched by office workers on a daily basis and high levels of contamination were also found on computer keyboards, water fountain and vending machine buttons. Practicing good hand and surface hygiene can reduce average hot spot germ counts by 59 percent.

• Away from home: Testing in six major U.S. cities revealed that more than 65 percent of gas pump and mail box handles and more than 40 percent of escalator rails and ATM machine buttons were highly contaminated -- potentially exposing people to illness-causing bacteria. Another study found that TV remotes and bathroom sink faucets were among the most contaminated surfaces in hotel rooms.

• At school: Highly contaminated surfaces in schools include bathroom stall door handles, classroom desks and door handles. In fact, the surfaces that teachers touch have 10 times more bacteria per square inch than those touched by people in other professions.

Don't be caught off guard. Be prepared to take care -- especially given the severity of last year's flu outbreak, which was declared an epidemic by the Centers for Disease Control and Prevention (CDC). There's a lot you can do to protect yourself, including sharing these tips -- not germs -- with family, friends and colleagues.

1. Speak up. Tell the people in charge -- at your office, your children's school, a hotel, or any place else -- that you care about staying healthy and ask them to stock up on supplies that can help break the chain of germ transmission. These include instant hand sanitizer, disinfecting wipes and plenty of soap, paper towels and facial tissue.

2. Lead by example. Wash your hands often. Cover your mouth and nose with a tissue when you cough or sneeze. Use disinfecting wipes to clean common surfaces, especially if they've been touched by someone who is sick.

3. Wash, wipe, sanitize. The HYGIENIFY! wash, wipe, sanitize protocol reduces the probability of infection from colds and flu in the workplace by about 80 percent, according to a Workplace Wellness Intervention Study. The use of disinfecting wipes can reduce the number of surfaces contaminated by viruses by 62 percent.

Remember: The "Unconcerned" people around you during cold-and-flu season can leave you unprotected. Make sure you prepare to take care of yourself in advance of cold-and-flu season. Research has demonstrated that if 50 percent of people follow the wash, wipe, sanitize protocol, the exposure to and probability of infection from common viruses is significantly reduced.

Read more:
Ask Sadie: It's Flu Season! How You Can Stay Healthy
Paper Towels vs. Hand Dryers
School Is In Session, So Are Germs
The Healthy Schools Project*
Workplace Wellness