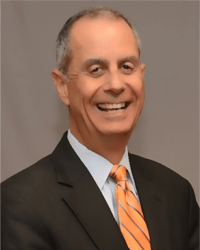 Steve Thomas began his career at WAXIE in 1983 as a sales representative for the San Diego branch, then known as San Diego Janitor Supply.  In 1984, Steve received WAXIE’s first ever Sales Rep of the Year Award.  He was promoted to District Sales Manager in 1986.  And even though WAXIE had been in business for 43 years, in 1989 he became only the fourth ever San Diego Sales Manager.

Steve left WAXIE in 1993 to pursue the restaurant business with his family and helped grow the Pat & Oscar’s restaurant group to 22 locations in Southern California.

Steve relishes time spent with his five kids.  He and his wife enjoy cooking and entertaining.  Steve is an avid mountain biker and enjoys craft beer.